The Gospels in general give us a pattern, an example, a model for what a great story looks like: The Cross comes before the Resurrection – the story of Lazarus in particular shows us this truth, and it’s where we are at in our liturgical year, you have to go through Lent to arrive at Easter. What is your story?

The ending has the ability to project back into the story and change the meaning of the whole thing – in a story, but even in reality – to change reality – for the bad…but also for the good.

Simple assignment: write your story of coronavirus pandemic including the ending.

There was this pandemic that forced us to shut down life as we knew it. Schools and businesses were closed, and we had to stay home. Some people were fighting over the last toilet paper rolls at the supermarket, some people spent all their time watching the news and worrying – it was a time of real uncertainty.

There was a part of me that was tempted to…

(sleep in, lay on the couch, scroll endlessly through the internet, bicker with my brothers and sisters, vent my frustrations on my family and…) fill in your particular temptations.

It was a difficult transition and I had lots of excuses, but I decided to…

Personal (make a daily schedule, Get up each day at ** and make my bed, try to never complain and if I did I immediately apologized, sit down and read **, no matter the weather go out for a walk, never snack between meals, find something new and fun to do every day as a family, call **, not drink before 11am, declutter every room in the house starting with the garage…) fill in your personal goals

Spiritual goals (watch Mass each day, say the rosary every day, pray the Divine Mercy Chaplet, do the Stations each day, set aside 15 minutes for Scripture meditation, say the liturgy of the Hours, from Ibreviary app…) fill in your goals

(fill in what you want it to look like…)

Bishop Sheen said: “When all is said and done, there are only two philosophies of life. One is first the feast, then the hangover; the other, first the fast and then the feast.”

Which one are you going to choose? If we follow the pattern laid out for us by Jesus this doesn’t have to be a long sad and depressing story that ends in sorrow and death. It can be a story with drama, obstacles, challenges, twists and turns and finally arrives at the redemption and the resurrection that makes the whole story worth it. 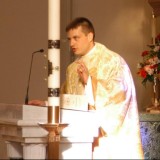